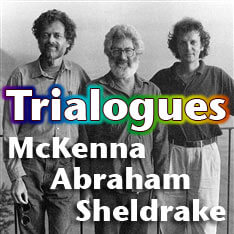 These three-way conversations between Rupert and his close friends Ralph Abraham and Terence McKenna began in private after their first meeting in 1982. Encouraged by their similar fascinations and complimentary views, and inspired by the synergy of their ideas and styles and the input of differing areas of expertise, the three friends continued to meet and explore new areas of thought. Throughout their public trialogues, which began in 1989, they maintained the spontaneous, playful and intrepid spirit of their private talks, and were thrilled that these explorations inspired further discussions amongst their audiences. Their trialogues and friendship have been a source of great inspiration and stimulation for their own lives and work.

The five filmed trialogues are below. The rest are available in audio.

The future of humanity 1hr 40min

Predicting the future is seldom a sure thing but that didn't stop Rupert, Ralph and Terence in this trialogue at Esalen back in '92. Many of the issues they discuss remain unresolved today, long past the turn of the millennium and 2012. Esalen Institute, 1992. 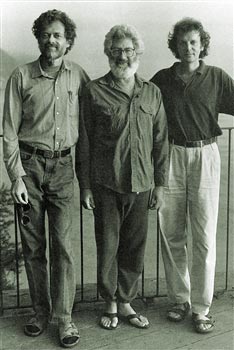 Rupert, Terence McKenna and Ralph Abraham examine the evolution of the mind in language, the machine and at the edge of the millennium. University of California, Santa Cruz, June 6th, 1998. Also available with Russian translation.

Rupert, Terence McKenna and Ralph Abraham examine maths as a language of space-time pattern, the psychedelic vision of the logos be externalised through supercomputers, and more. Esalen Institute, 1992.