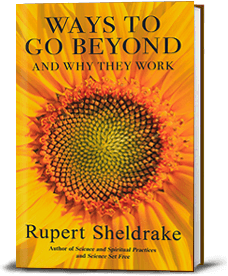 Ways to Go Beyond and Why They Work recommended by Charles Foster, bestselling author of Being a Beast, interviewed by Cal Flyn


Talking about looking at the world in a new way, let’s move onto Rupert Sheldrake. His new book Ways to Go Beyond also considers at the, the larger experience of nature and being. It’s a sequel to Science and Spiritual Practices, which we discussed back in 2017. Why do you think it amongst the best nature writing of 2019?

Everything Rupert Sheldrake has done has been a broadside against the reductionism that has characterised biological science for a long time. When Rupert brought out A New Science of Life back in 1981, the then-editor of Nature, Sir John Maddox, described it as an “infuriating tract.” “The best candidate for burning there’s been for many years.”

In a later broadcast Maddox said: “Sheldrake is putting forward magic instead of science, and that can be condemned in exactly the language that the Pope used to condemn Galileo, and for the same reason. It is heresy". It’s an extraordinary and revealing admission. Sheldrake had offended a sacred paradigm.

That’s quite a response.

So Sheldrake had prompted the editor of Nature to assert, without any apparent embarrassment, that the reductionist creed is just that: a creed. It’s a statement of essentially religious belief. The concordance of that religious belief with the way the world really is has been called dramatically into question over the past few decades. And by nobody more than Rupert Sheldrake.

And why is it a ‘nature book’? Well, because (I think) lots of people who want to recover a sense of what the natural world is and what it means find themselves inhibited from doing so because they feel that they have to use the language of conventional reductionist biology to describe the natural world and to describe their feelings towards it. And that language is woefully and obviously inadequate. Sheldrake points out that the language is inadequate because the reductionist paradigm is inadequate.

That makes sense. Science as straitjacket.

People rightly feel that to say that we are nothing but our genes, or our molecules, or other component parts – is to miss out on an awful lot. That nothing-buttery (the idea that we are nothing but lumps of matter, and that’s the end of the story) doesn’t do justice to the astonishing complexity and beauty of the world, or to our sense of significance and interconnectedness. We are indeed lumps of matter, but that doesn’t say everything that can and should be said. This isn’t an argument for naïve creationism or intelligent design, of course. The universe is an evolved and evolving place, and we know a good deal about the mechanisms by which complexity is generated. But we don’t know it all. A lot of humility and a lot of truly scientific scepticism are urgently needed. I see that humility and scepticism in Sheldrake. We’re back to iconoclasm, aren’t we?: our existing representations of the world, including the representations that we couch in scientific language and theory, fall short of the wonder of things; they constantly need to be dismantled and reconfigured.

Sheldrake is the cataloguer par excellence of the difficulties with the reductionist worldview – a world view which is teetering on the edge of oblivion. He points out its shortcomings better than anyone else. He helps us to go into a wood and feel wonder, and feel all the other things which the natural world should be producing in us, without worrying that it’s in some way scientifically disreputable.

Well, we should touch on that point. Sheldrake himself is a former Cambridge biologist, but is now best known for this more spiritual approach, which has seen him accused of pseudoscience. People can be hesitant to engage with his writing for that reason. But you feel that he has valuable insight, and it’s worth laying those criticisms aside?

Lots of the august canons of biological reductionism have fallen. For instance we now know that the old model of genetic determinism is the exception rather than the rule. It is possible to say in a few cases: ‘Right, you’ve got the gene for X. That means you’re going to get X’. But usually it is not so simple. We now know that there is a very fluid, articulate conversation between genes and environment. The effect of environment on genes is profound. It switches genes on and off. To put it another way, Lamarck, who proposed the inheritance of acquired characteristics, and was reviled for so long, is back – and this time he’s got tenure! The name ‘Professor Lamarck’ doesn’t appear on his door in the department: Instead the label reads ‘Epigenetics’.

So, this book, together with his earlier book, Science and Spiritual Practices, is a map of some of the portals which have traditionally been used to reach the more-than-human world. That of course includes the natural world. All the practices increase the porosity of our shells, help us to see our own place in the nexus of things, and help us get closer not just to God (don’t be put off by the word ‘spiritual’) but also to badgers and leaf-veins and molecular biology and the faces in clouds.

Because I suppose that’s what we’re looking for when we’re going out into nature, and in nature writing: that sense of being part of something bigger than ourselves.

Yes. We’re looking for that and, as we’ve discussed, I think we’re also hoping for our own models, which we know to be hopeless, to be trashed – enabling us to make a clean start, more consonant with the sorts of creatures we are. Most of us have an intuition – which becomes a conviction when we look into the eyes of our dogs – that humans, although very special, are intimately connected with non-humans. This is a blindingly obvious thing to say, a trite evolutionary truth. But much of our personal, and all of our environmental, malaise is caused by denying it. We can’t really understand ourselves as individual humans unless we know the sorts of animals that we are as a species. We want to feel the fellowship with non-humans which is our biological heritage. We want to know our place in the web, and to be able to say, when a six-legged, compound-eyed relative lands on our head: ‘That’s one of our lot. His face is in our family album’. That sort of reflection allows us to locate ourselves: to feel less disorientated and alone: to know where we belong – not only in the genetic matrix, but also in geological time, which is otherwise terribly scary. Sheldrake can help us to have a more holistic understanding of our nature, and the nature of nature, and therefore of the relationship between us and the other-than-human world.